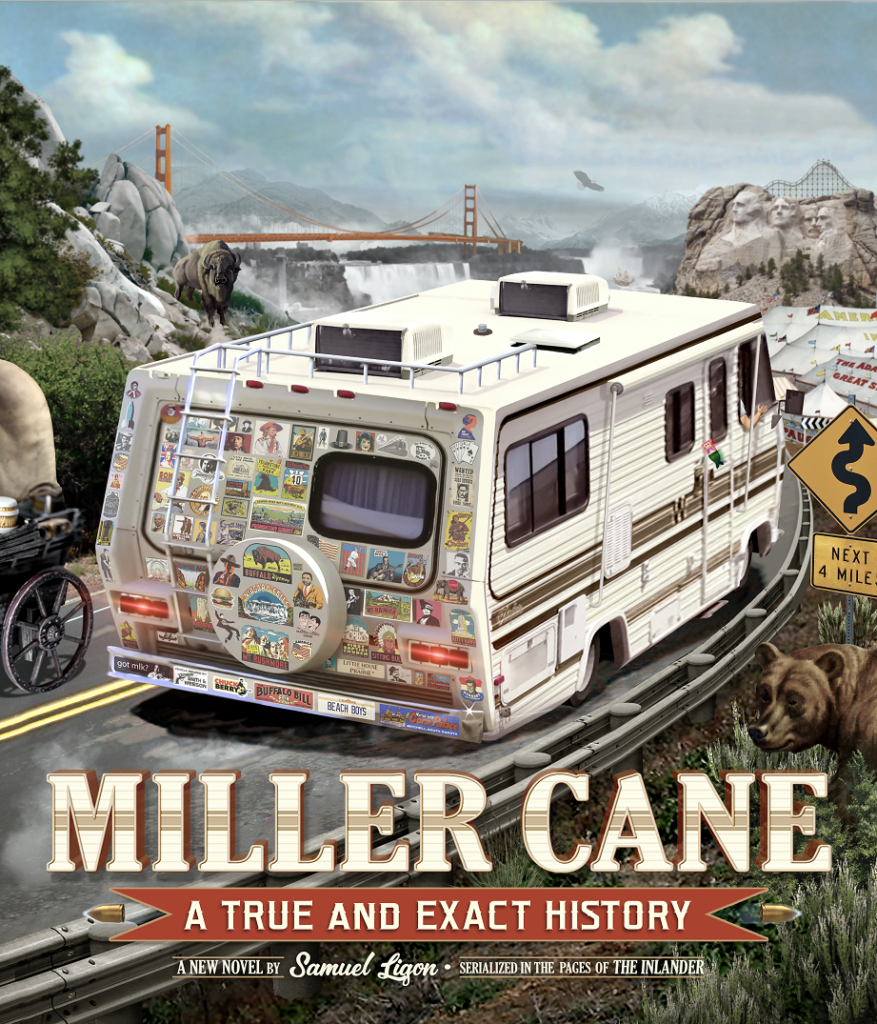 A serial novel appearing in the pages of Spokane’s weekly newspaper The Inlander,  starting September 13, 2018, and ending late 2019.

A fraudulent historian who makes his living conning the victims of mass shootings returns home to save the young daughter of the woman he loves, taking her with him on his roadshow across the worn out heart of America, staying one step ahead of what’s after them.

Miller Cane: A fraudulent historian, who’s lately been making his living conning and comforting the victims of mass shootings.

Carleen Callahan: The eight-year old doll-making daughter of Lizzie James and Connor Callahan. Has no idea she’s recently become an heiress or that her mother has shot her father. Has no idea that her father is after her, or what her father looks like. On the road with Miller Cane.

Lizzie James: An artisan jewelry maker, and a baker at the Mount Vernon co-op, currently in Skagit County jail for shooting her estranged husband, Connor. Has asked Miller to hide Carleen.

Connor Callahan: Son and grandson and great grandson of money, which somehow skipped him, going to his daughter instead, who he hasn’t seen since she was a baby.

Jimmy Heffner: A survivor of the Cumberland Massacre, whose child died there. Heffner wants his son and his money back.

George Sampson: Miller’s editor, who works for a textbook publisher in Texas. The Hero/Villain project is his idea.

Buckle up, gentle reader, Sam Ligon is about to take you on an outrageous road trip across American history and hysteria. It will be tempting to see your fictional guide on this serialized journey, the massacre-counselor and unhinged textbook author Miller Cane, as an unreliable narrator, but it’s the American myth that is unreliable in Sam Ligon’s razor-sharp satire. For the next 12 months, hold tight as Miller Cane barrels across the West telling its alternate history while trying to protect his young charge Carleen at a moment in time when it feels like two hundred years of violence, hypocrisy, and cultural insanity are bubbling up in the present moment. Oh, and there’s a chase. And a cat. And it’s hilarious

Miller Cane is a jolt of straight-up, adrenalized American greed and violence. Sam Ligon’s prose is an elemental force — fierce and funny, profane and sacred — and his vision of the country’s past and present is as engrossing as it is unsparing. Read this and have a better year.

Sam Ligon is a startlingly powerful writer. How can a post-massacre feel so eerily alive on every page? Hero Villains abound. And if you think there’s nothing fresh to say about the tenacity-slash-fragility of human bonds, read Miller Cane. Only in the best-told tales, like this one, may we measure and forgive one another, and ourselves.

Any story that Sam Ligon writes is cause for celebration, and now we have the wicked anticipation of what comes next. Mark your calendars and settle in for a ride that is always wild, full of tension, sharply imagined, empathetically told, funny as hell, and absolutely fearless.

— Kim Barnes, author of In the Wilderness, a Pulitzer finalist

Spokane readers, rejoice! You know Spokane is a literary town when it’s beloved weekly, The Inlander, serializes a novel. How cool that the Inlander joins such a rich literary tradition that brought fame to Alexandre Dumas, Charles Dickens, and Wilkie Collins. Kudos to The Inlander and to Sam Ligon, one of our most exciting writers, for re-introducing the serialized novel to the Inland Northwest.

Every time I see Sam Ligon, he asks me, “What’s happening?,” which continues to throw me, as what I want to say is “Fine,” but that does not make sense, and I really can’t explain everything that is happening in such a short time. Reading the first three chapters of Sam’s new novel Miller Cane: A True and Exact History is kind of like having a social interaction with Sam: you have to up your game. Be witty and quick. Direct and ironic. And no matter what you’re talking about, you’re also talking about America. Like Miller Cane, who at one point turned my whole childhood on its head when he says, “Plenty of things didn’t work out on the prairie or on the banks of Plum Creek.”

— Laura Read, former Spokane poet laureate and author of the book Instructions for My Mother’s Funeral

Sam Ligon’s writing is whip-smart and witty and wildly entertaining. He seamlessly layers absurdity with difficult truth in a way that makes readers laugh, listen, and think. Sam’s voice is original and unflinching and utterly unique.

— Kris Dinnison, author of You and Me and Him

People clamored on the docks of New York harbor, awaiting the ship that delivered the next chapter of Charles Dickens’ serialized novels. Such is my fevered anticipation for Sam Ligon’s Miller Cane!

— Daniel Orozco, professor and author of Orientation and Other Stories

Sam Ligon has long been one of my favorite writers and this new one, Miller Cane: A True and Exact History, is his best yet. It’s as uproariously funny as it is heartbreaking and razor sharp pointed as it is sprawling. This novel is a blow-torch aimed right into the depraved and withering heart of America.

— Robert Lopez, author of Part of the World

In Miller Cane, we find complicated characters trying to get by in a world of massacres, smoky haze, and dysfunctional relationships. Darkly comical and soberingly grim Miller Cane is a realistic 21st-century American Everyman: Doing his best to hold it all together, even if he’s had to con some people to get by.