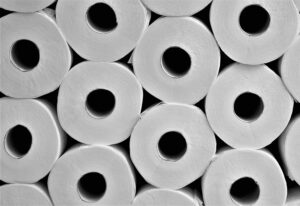 “The Douchemans” in the Inlander

There was an old couple who lived in a ramshackle house above Hangman Valley at the end of our street, maybe sixty, seventy years old. We called him Dick and her Donna, collectively the Douchemans — Dick and Donna Doucheman, and their little dog Pepe. Nobody liked them much, the kind of people who gave out dumdums at Halloween and contaminated the neighborhood with their cooking smells — cabbage and stroganoff and lots of hard boiled eggs. Bubba, their daughter, was in college somewhere, or a lady’s prison, until she came home for the virus, probably bringing it back to Spokane with her. Broken appliances lined the porch, and crumbling angels and lawn jockeys stood guard in the dirt out front. Whatever the Douchemans were doing inside during those quarantined days and nights, word was they were sitting on about a thousand rolls of toilet paper. Tammy’s friend Kipper had seen them at Costco before the virus, hauling out pallets of the stuff. Like they could see into the future — or make it happen.

Read more at the Inlander